Politicians Making Money Off Health Care ~ Everything Needs a Reset

On the same day that Mitch McConnell reportedly said that something will have to happen in the arena of Health Insurance if they can’t repeal and replace ACA, I read a report that some Senators have been investing in Health Insurance stocks.  My question is how is anything but a form of “insiders trading?” Didn’t they lock Martha Stewart up for that? Oh, right, she’s a woman. They locked her up for that.

I serve myself and make the most $$$ possible! People shouldn’t get sick, that’s not my problem. If they need insurance they should get a job!

Politicians are making money off of the people they are supposed to represent and ultimately off the rest of us. It’s one thing if the fame you gain from the notoriety of being a politician makes you money after you leave office in the way of speaking engagements and published books, etc., but to make money off the actual legislation worked on is a conflict of interest.

John McCain was a part of the Keating 5 back during the Savings and Loan scandal and according to him, he “learned a hard lesson about conflicts of interest” as a result. At the moment, I’m not sure if he totally remembers that lesson.

Modern life has become so complicated it makes sense that it may be difficult to keep track of what’s ethical and honorable at all times. The opportunity to make money, to be greedy is clearly more than many can handle. Apparently, when it comes to our politicians, we need a new handbook for living ethically and honorably. Maybe we all need one. The most recent breaking news would confirm this. Never have we seemed so lost.

Every single system within our government is a system that has evolved over time, and we’re talking about hundreds of years.  Our governmental structure including the States and how the states vote is antiquated and cumbersome and has the seeds of corruption built right into it. The Electoral College is part of an antiquated system designed to compensate for votes in States with more slaves than voters. We need a major overhaul of everything. Every day this becomes more and more apparent.

We don’t need to have people like Rick Perry, who can’t understand a simple concept of supply and demand in charge of our Energy Department, or Betsy DeVoss, who she hates Public Education and is making money off her position in charge of our Education Department, or Scott Pruitt who acts as if he hates clean water and air in charge of our Environment. These people are not leading the kind of overhaul that is needed. These people are contributing to the destruction of what’s in place. They are masquerading as the leaders of their posts, taking tax payer salaries while destroying the departments they head from the inside out.

The people running America at this point may well be any Tom, Dick, and Harry, or Larry, Moe, and Curly, or any other ridiculous combination of individuals. We don’t need Steve, Reince, and Donald running our country. No, not Mitch and Paul either and no, not Chuck and Nancy.  We need people with politically unadulterated smarts and integrity. We need people with hearts and souls, not greed and lust. We need individuals with an understanding of history, a belief that the dreams of our Founding Fathers are possible, and a vision for our future. We need non-corrupt, non-greedy, non-self-serving people running this country. This particular family that has taken hold of our government, and their “inner circle” (aka cronies) are the most perverse collection of immoral, unethical, selfish, self-serving, uneducated, ignorant, conspiracy believing folks imaginable. Treason and malfeasance have moved into the White House. The U.S. has been downgraded to a “flawed democracy.”

Every single American is being called upon to stand up for our Country and protect our Democracy! We must start by cleaning up our voting system and ensuring everyone has a voice. How many Americans that are eligible voters, don’t have a cell phone or email address? This must be amongst the first things addressed if we are going to do some kind of massive system reset. Once we can be certain that every eligible voter has a way of being contacted, we can be more confident that they can be reached through a grass roots movement.

Each State can reach out to every single voter in their State. States can build amazing relationships with their inhabitants; voters can network to reach other voters.  We need to leverage the technology available and increase participation among constituents, while at the same time we must be vigilant about the truth and staying heart based as we work. We may need to consider a form of paper ballot, to avoid the exposure of electronic interference. We need a true grass roots movement like never before!

We need to start thinking anew. The 21st Century has arrived, we need to start behaving a such. We are not individual states in an individual country. We are citizens of Earth. You happen to be living in a particular Country and State (America’s terms). But we are all inhabitants of Earth. Earth has one source of “air” for its inhabitants. Once it is ruined it will be ruined for us all; same with water; same with the animals. In a world where we can travel thousands of miles in virtually the blink of an eye, it’s time to start looking at Earth collectively. Every country should be behaving as if they are a part of the larger whole; we should all be in agreement on this. The time has come.

In America, it’s past time to start looking at ourselves collectively. At one time several hundred years ago, the majority of us agreed to try “the great experiment” that is “America.”

What say you now? If we wish to live up to the dream of our paperwork and our Founding Fathers, then you will want Universal Health Care, or Single Payer Health Care, or Medicare for All, or National Health Care, or whatever you want to call it. If you are a true American, one who believes in the dream of equality for all, you won’t accept anything less. Your “party” should have nothing to do with this position because it goes to the innate rights granted by the documents that create us. Only with some kind of equal access to health care can the Great Experiment live to become the reality it is intended to become. For we are a land of equality.  We are supposed to be a land that provides life, liberty and the pursuit of happiness to everyone. We’re so far from that at the moment it’s pathetic and not surprising considering our loss of democracy.

You can not pursue happiness if you are worried about your health, or paying your medical bills. You should not be punished for something out of your control, such as an illness, a disability or pre-existing condition.  We need to get rid of the notions that people deserve to be sick, or that there are people taking advantage of the “system.” While there may be the few that do abuse the system, they are not the majority and rather than casting everyone in the shadow of the few, let’s figure out better checks and balances so that we can provide the necessary and rightful care to those in genuine need while protecting against fraud in the system.

There is a great shift in consciousness that must occur if we are going to get ourselves out of this pickle we are in, in America (and on Earth).  Human beings are creative beings. We are powerful beyond our wildest dreams.  We do not need capitalism. We do not need greed.

When we move out of our heads and our egos and process from our hearts instead, with an awareness of our connection to all that is, we connect with the power that rules the Universe. We become unstoppable when we stay in our hearts and conduct ourselves from there. Abundance will flow to each of us because the entire Universe and everything in it is participating in this grand illusion and our great experiment. Everything from angels to snails are on the edges of their seats waiting to see what we humans do!

Please join me here on the road to peace. #InsistOnLove Insist on health care for all. Insist that we join the rest of the developed countries in the world by caring for our citizens instead of treating each other as problems.

Insist on love, first for, then from yourself and then ask those around you to join you. Each person who joins us in the Insist On Love movement creates the energetic conditions for others to join us. Please spread the word!

Thank you for reading! 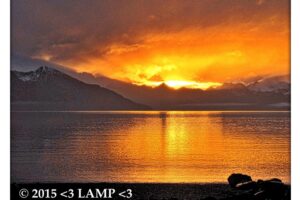 Some small thing can lead to so much larger of an experience, if we pay attention to the moment, and what life gifts us.

I’ve been taking lots of classes and listening to lots[...]

The Universe Smiles With Synchronicity

Sunrise 4.2.13 This journey must be documented; sometimes the stories[...]