Point That Finger at Yourself!

I think it’s a rare experience to find a really good boss; someone you actually learn from. Throughout my life I’ve held a number of jobs, in an extremely wide variety of professions.  At one point, I had a career as a computer technician, as both a hardware and software technician; I maintained the first telephone “help desk” for the State of Michigan’s first local area networks, back in the mid-’80s. At the time, I was working for Core Technology, a “Burroughs” support company, founded by Robert M. Bessette. I’m not saying I didn’t learn anything from other bosses along the way, before, or after, but of all the bosses ever, Bob, as we were allowed to call him, taught me more about life, work, and being successful, than any other person I’ve ever known. By the late 80s I’d outgrown the help desk position. After dabbling as a computer instructor at his request, Bob asked me to take a job in sales.

This is where my real learning occurred. The sales position started out as a telemarketing job at 100% commission. I don’t think many people realize how many sales jobs out there are just like that one – no benefits, no salary, no guarantees – just a lot of hard work, with fairly large rewards if successful. The key is becoming successful. That’s one thing Bob Bessette knew how to do; and he was both willing and anxious to teach others. Make no mistake, this was not altruism on his part, but capitalism. The more his sales force sold the more the company made, hence, the more he made. I think to him, I was like a tomato plant ~ nurture and care for it properly, and it will PRODUCE. (He was right!)

Typically, in a sales organization, you have your monthly “quota” – your target sales figures for the month, and weekly sales meetings to review where each sales stands, how close to “closing” the deal each salesman is. Those meetings were often extremely uncomfortable and unpleasant, but I can honestly say I learned some of the most important lessons ever as a result.

For companies with sales divisions, it’s extremely important to the upper level management to know what’s happening with their revenue stream, so these meetings could be quite intense, particularly if a large sale appeared to be faltering, or taking too long to close. Over the years we expanded the sales division, so eventually it wasn’t just me getting “shredded” every week, but a room full of MY staff, along with me.

We’d all gather, first, in the President’s (Bob’s) office for our meetings, later, as our numbers grew, in a conference room, and we’d “go around the room,” each salesperson reporting on their progress: new leads, current prospects, status of pending sales. Bob, an extremely savvy businessman would question us; grill us is more like it. You couldn’t slide one past Bob, or hide from his scrutiny. If you had projected a sale to close and it hadn’t, you explained why. If you didn’t have a reasonable number of new prospects, you explained why. If you hadn’t moved the right number of prospects into the pending sale category, you explained yourself. As soon as you tried to blame it on anyone other than yourself: look out!

“Take that finger of yours, and point it at yourself!” Bob would exclaim. He was all about personal responsibility, and blaming oneself, not somebody else, if a sale had not gone as planned.

The thing is though, the same is true for life. It is rarely, if ever, someone else’s fault for things being the way they are. Personal responsibility is no longer a popular notion. We’ve become a lazy, dependant, soft population, all about blaming others for our predicaments. As I watch the news on TV, listen to the stories on the radio, read the newspaper, I can’t help but remember those discussions. When I run most of what goes on through my “Bob” filter, I can just hear him! “Take that finger, turn it around, and point it at yourself!!”

Till next post, wishing you wellness and happiness!
Thank you Dear Reader,
Namaste`
P.s. I welcome your comments and questions. The link is at the top. 🙂 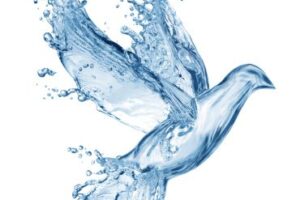 dove made out of water splashes isolated on white

ANGELS Care Inc. What Happened and Where Did It Go?

[Reposting ~ when we moved website platforms/providers we seem to[...]

Most Important Words Ever Written

What Humanity Needs is an Inside Job!